from Swordplay by Baba Brinkman 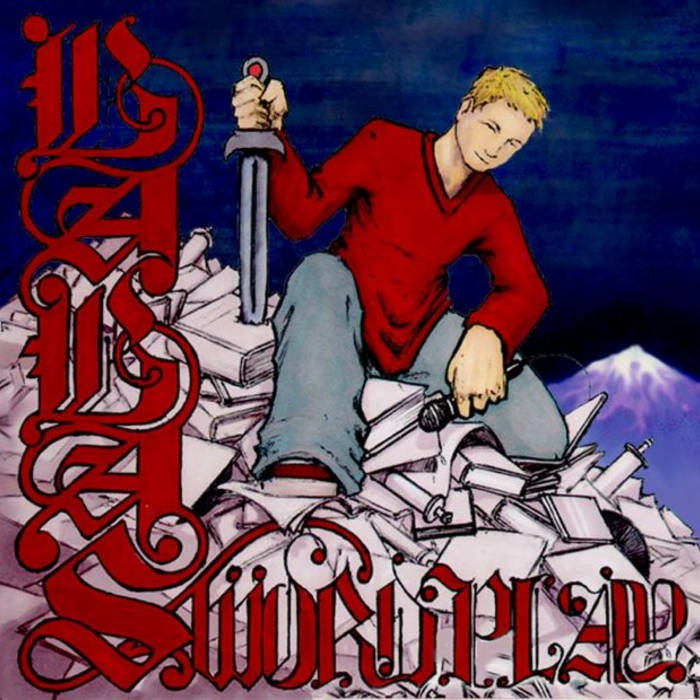 I feel my words add up to one thing, and that’s nothing
I’m struggling and searching; I’m verbal axe-juggling
Stumbling and lurching, my syntax troubling
I'm Busting verses, trying to capture something
Subtle about the rapture and passionate suffering
Attached to the cluttered path of cash coveting
Corruption contaminates the task of governing
Consumption demands massive gas guzzling
With hands tied up in the act of ass-covering
Above I see the sword of Damocles hovering
Assassins set to dispatch another king
As the pendulum swings, feel the plastic smothering
Sending some scuttling back under mother’s wing
Others stand muttering, watching sand crumbling
Castles come crashing to land, their plans tumbling
I can’t help wondering how the dream was killed
It's like the frame was built weak, but it seemed so real
I blame myself and accept the shame and guilt
For being a training-wheel, out to gain the skills
To play the game well and chase fame and wealth
The same as everyone else; yeah, it strained my health
To remain in the filth, but the pains I felt
Didn’t move me to action, and plus I knew this would happen
But this stupid attraction to hubristic passions
Grew, and through attachment I flew into a trap and
Couldn’t clue into the fact of the illusion’s enchantment
Until I sat on the ruins of the last human advancement
A loon laughing alone in a thousand-room mansion
With computers, fax, and phones used to grow food plants in
The last bastion, what remains of humanity
Madness rages in a string of profanity
All that’s left of an age of insane vanity
Condensed into one case of vain insanity
I scream and complain to the rainforest canopy
My name and DNA chain aborts, vanishing
As animals watch the last corpse from Titanic sink
The planet thinks: “Finally, man is extinct”
And begins replenishing all the damaging things
That we did with our hands while micromanaging
Now we’re back to the last days of weapon brandishing
When we still have a chance to change; come back from the brink
And cancel that command on the satellite link
It’s like, the battles of right-wing fascist militants
Remind me of mankind’s past irrelevance
You can wipe us all out like Florida brown pelicans
And it won’t necessarily spell the end of mental elegance
We feel these evolutionary arrogant elements
But as long as there’s still chimps, dolphins and elephants
Or any mammal animal with strands of intelligence
Language and culture eventually will swell again
I can’t tell you when, but I know it’s possible
So let’s drop the bull: this show is stoppable
But all in all I’d rather outgrow the obstacles
Than start all over from go; that’s so illogical
For us to make progress, though, the soul has got to flow
And soldiers have got to slow down and start talkin’ peace
Part of the problem seems to be with corporate greed
But they’re all just people with kids they got to feed
Lost in a colossal sea of private property
And can’t see the forest for the trees, just frogs asleep
In a pot of deep water, boiling hotter
Soil erosion problems, oil and slaughter
Destroy and prosper, spoil and conquer
Enjoy it while it lasts, boys, it wont be much longer