from The Rap Guide to Climate Chaos by Baba Brinkman 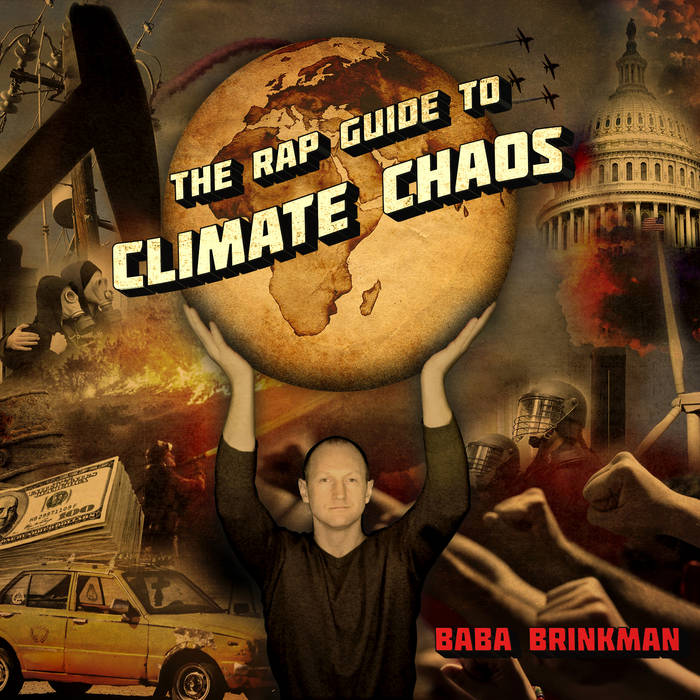 You want a new definition of “hard core”?
Check out the intergovernmental climate report
It says the world is getting warmer, unequivocally
And the oceans have increased 30% in acidity
And 90% of the warming trend is oceanic
And concentrated in the arctic – nobody panic
But the level of greenhouse gasses in the air
Is higher now than it’s been in millions of years
We added more than a trillion tonnes of CO2 to the atmosphere
It’s gonna be centuries before some of the gasses clear
I’m dropping science, unvarnished, unbiased
But I don’t blame you if your instinct is to deny it
‘Cause we evolved to prioritize immediate threats
If it bleeds it leads, that’s what the media says
So let the gangster-esque rap music paint a picture
And I’ll hit you with some evidence-based predictions Get ready for…

Hollywood summer blockbusters can’t touch this
I get my thrills from the latest reports published
By the Intergovernmental Panel on Climate Change
Formed in 1988 to get the science straight
Now they dropped the fifth assessment and the data’s up to date
So allow me to summarize: bad things on the way
Higher emissions, sea level rise, dire predictions
On target for disaster movie-style predicaments
In Copenhagen we set a limit of two degrees
But that’s still enough to disintegrate major ice sheets
Over the course of centuries, or maybe decades
Yeah, some of the details are still up for debate
They fluctuate between certain disaster and likely disaster
Slow and steady or higher and faster
Consensus, it’s the lowest common denominator
Which means it’s probably gonna be way worse
Than the…

So be afraid, be very afraid
But we’re not, despite what the scenarios say
And the effect of talkin’ about it is visible yawning
And occasionally changing our behaviour microscopically
And even those who get it, tend to get it logically
But not viscerally, so we’re navigating myopically
The threat is existential, it’s not environmental
And your individual response is inconsequential
Only coordination of our whole species
Is gonna keep coastal cities from sinking below the deep seas
And when was the last time a solution included all of us?
Geophysics is at the mercy of geopolitics
Climate change communicators, keep it positive
People need to feel like they still have options
And we do have options, either we find a solution
Or we stick with the business-as-usual level pollution  And get used to the…